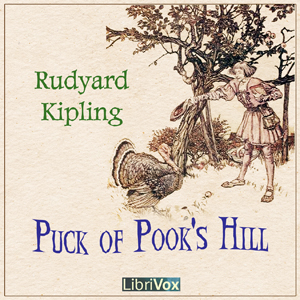 Puck of Pook's Hill is a children's book by Rudyard Kipling, published in 1906, containing a series of short stories set in different periods of history. The stories are all told to two children living near Pevensey by people magically plucked out of history by Puck. (Summary from Wikipedia)

An enjoyable set of mini adventures that also convey some history.

Personally I would skip the poems that introduce each chapter, but that probably says more about me than about the book...

Also: much to my disappointment, Kipling's "sequel" (Rewards and Fairies) didn't measure up at all.

Reviewer: katknit - favoritefavoritefavoritefavorite - August 11, 2009
Subject: Fanciful yet factual
With all the renewed interest in fantasy over the past decade, the 102 year old historical fantasy, Puck of Pook's Hill, deserves consideration. Two early 20th century children, living in Pevensey, England, have a chance encounter with the legendary Puck, who undertakes to bring them a series of first hand accounts of the history of their region. Puck introduces them to eye witnesses to such events as the Norman Conquest, the waning of the Roman occupation, and the dissolution of the monasteries. As the historic individuals relate their tales, they are suitable impressed with the children's abilities to resolve some of the mysteries that were not understood in their times. The selections of Kipling's poetry that accompany each chapter are related thematically, and pleasingly rhythmic. Recommended for grade level 4 and up through adults.

Uploaded by librivoxbooks on January 9, 2009